Welcome to the Sennadar forums

Yep it's as I expected about the ships, I didn't find anything graphically descriptive either.

I did some doodling, and yes I know it sucks, but I don't drawing generally, I use Photoshop manipulation. It's a general sketch, no details so please don't bite my head off. 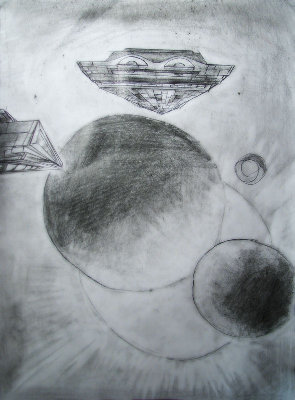 i'm gonna do some doodeling myself to, i like your sketch, and it might verry well be what Fel intended for the ships to look, but i've got a different image of them in my head. (Fel, you're welcome to comment

, i'm curious on how those ships exactly look)
Top 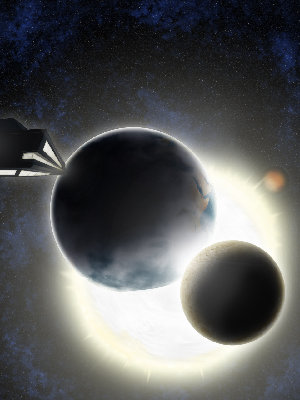 Edit: Okay, so that's the earth, the moon, and the stargate - backlit by the sun? with a Karinne(?) ship off to the side...
Top

The thingy in the background should be Mars, but it's much too close for the perspective. And yes it's a Karrine ship, as I imagine it. There should be one or two more Karrine ships, and I've planned for the stargate in the back too, but I haven't gotten to it yet.

I've used only Photoshop - drawing, filters and effects. I'm no good at 3D, much to my regret. I can model a some things with average difficulty, but that's as far as it goes. And since I'm not good at it it annoys me and I don't use it at all.

Аctually the set is visually too wrong as it is. If two object pass before the sun they would be only black shapes. I drew too much surface showing on both and they are more in a sorta sidelight view.

Edit: P.S. Spec, please split the topic it's ruins the spoiler one "Subjugation drawings" or something.
Top

I found this picture of what I presume is an halloween costume. It's very close to what I envision the gastalt is made of. It's certainly not the same design but the material and size are very close. They should be very unabtrusive and close to the face so as not to interfer in normal activities including sleeping. This would do that. Maybe someone with some artistic ability can do a pic of what it really would look like.

Fel already posted a drawing of what a gestalt is supposed to look like... see ch17 spoilers.
Top

Metatrone wrote:Umm Here we go...It's gonna be stuck this way for now till I can get my new tablet.

Any chance of seeing those ships from another angle?
Top

I've got my last 6 exams till the 11th. Then I'll have all sorts of time to waste.

I'll do some more work on the drawings, though they won't be a lot better since I won't be getting my new tablet till march. Turns out they don't have the one I wanted in stores around here. :/
Top

Since I got bored waiting for the next chapter of Demon's Bane to come out I went and made an attempt at the crest of Karinne. No, I didn't draw this by hand these are images I found on the net and put together in microsoft paint.

Anyway feel free to comment if ya want.
That is not dead which can eternal lie, Yet with strange aeons even Death may die.
Top
Locked
15 posts • Page 1 of 1